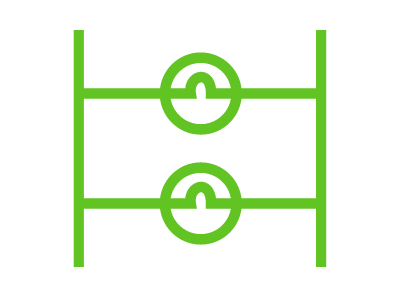 LEDs should not be connected to a constant current LED driver in parallel.

​Constant current LED drivers are used to power LEDs that have no internal current regulation.

When you connect multiple LEDs to a constant current LED driver in parallel, you run the risk of reducing the life span of your LEDs. 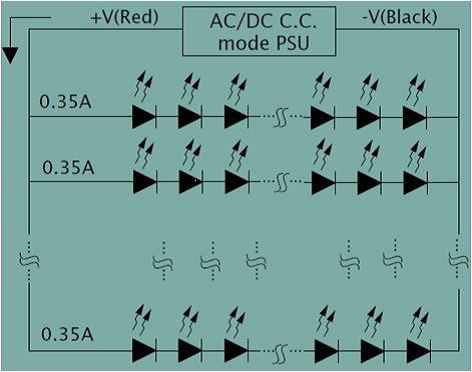 How Does This Happen?

First, it is important to understand that all LEDs have a manufacturing tolerance. This means that even though you are using several LEDs with exactly the same part number, there can be slight variances in the voltage at which the LEDs start up.

For example, you may have a constant current LED driver with a 1A output powering 5 LEDs with an input current rating of 200mA.

Due to the permissible manufacturing tolerance one of the LEDs will come on once the output voltage of the LED driver reaches 9V, another will come on at 9.3V, and the others at 9.5V, 9.6V and 9.7V.

Because the first LED is on before the others it will draw a slightly higher current than it needs. The other LEDs will be slightly under powered. As the first LED is being over driven, there is a risk that its lifespan will be reduced and it could fail prematurely.

This failure has a knock-on effect. Because there are now only four LEDs connected to the LED driver, they will all be driven with a current of 250mA.

This means all 4 LEDs are now being overdriven.

This will most likely result in another of the LEDs failing soon. Of course, this then means the remaining 3 LEDs are now driven with 333mA, which means it won’t be long before they too fail.

Should you need to connect multiple LEDs to a constant current LED driver, it is advisable to connect them in series. This way the power is cut should one of the LEDs fail, protecting the other LEDs from being over driven.

If you have any questions about wiring LEDs to a MEAN WELL LED driver, please do not hesitate to contact Power Supplies Australia.