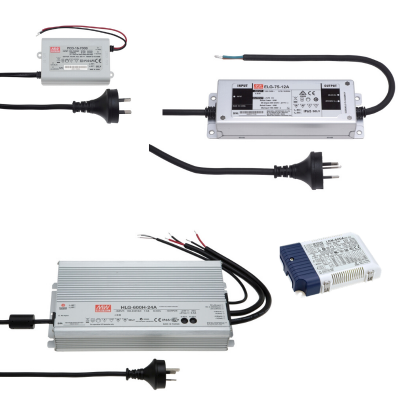 The Function of a LED Driver

The function of a LED driver is to deliver a regulated supply of power to an LED light fitting, or a light emitting diode (LED).

A LED driver is a switch mode power supply, which is an electronic device. LED drivers are also sometimes referred to as LED power supplies, or LED transformers.

The term transformer is not used correctly in this context. A transformer has a solid core with a copper winding. Power supplies that used to be supplied with electronic equipment were much heavier than they are today. This is because they were transformers, which have now been replaced by switch mode power supplies.

There are many different types of LED driver available, most of which you can buy online from Power Supplies Australia.

The type of LED driver you need very much depends on the following factors: 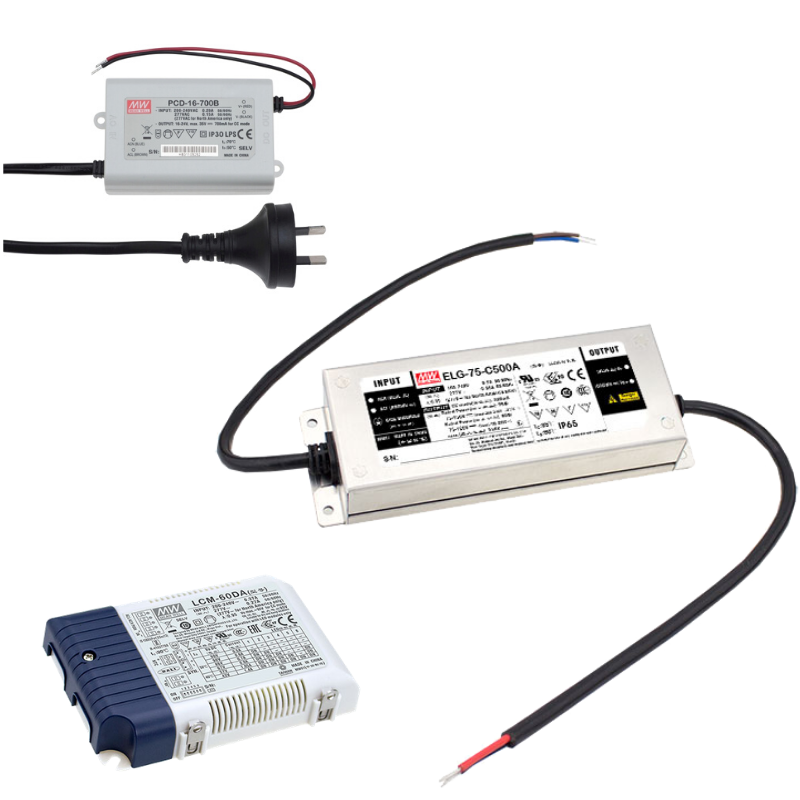 Constant current LED drivers are primarily used to power LEDs (light emitting diodes) directly. They are also used to power some luminaires or LED strips, which don’t have built in current regulation.

As the name suggests, a constant current LED driver regulates the current (amps) being supplied to the LED so that the current remains constant. The driver will allow the voltage to “float” to maintain the current at the required level.

When selecting a constant current LED driver, you need to know two things. The current required to power the LEDs (or luminaire). This is usually stipulated in milliamps, so you may see something like 350mA in the specification sheet.

Secondly you need to know the voltage range that this needs to be delivered at. This is usually referred to as the forward voltage range.

The LED driver you select must be able to supply the current within the entire range stipulated. For example, you could use a 350mA (6~54VDC) LED driver to power LEDs with the above specifications. But you couldn’t use one rated 350mA (40~58VDC) because the lower end of the required forward voltage range is not covered.

Important: Do not use a LED driver with a higher current output than specified by the LED manufacturer. You could shorten the lifetime of the LEDs or cause them to fail. 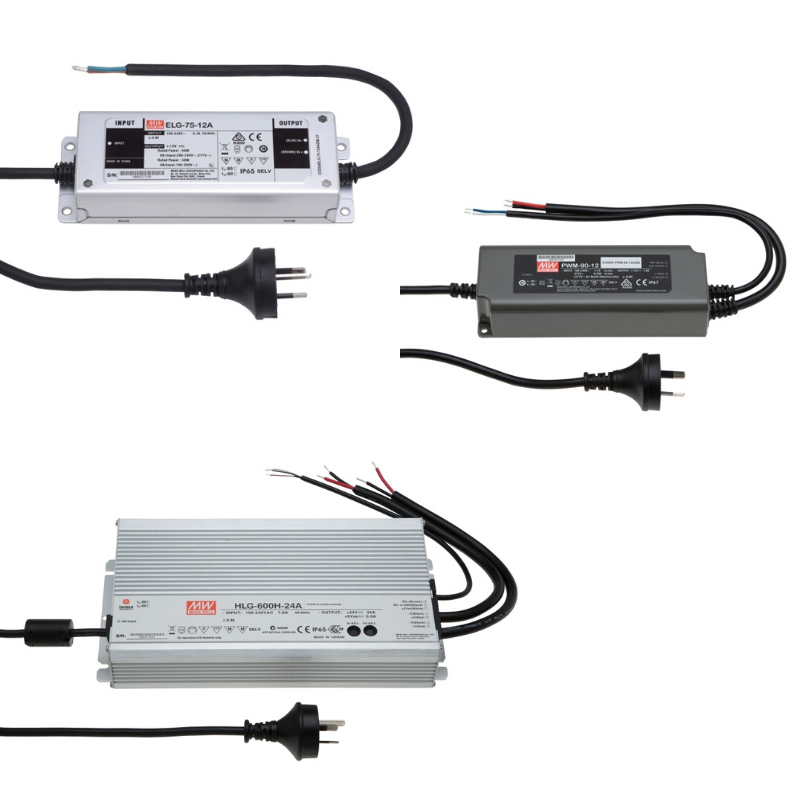 Constant voltage LED drivers regulate the voltage being delivered to the LED strip or luminaires, allowing the current to “float”.

You will need to know two things before you can select a constant voltage LED driver:

The two most common voltages used are 12V and 24V DC. Power Supplies Australia has an extensive range and to make it easier to browse, we have split the range in to two categories. These can be browsed by clicking on either of the links below:

We will be discussing weatherproof LED drivers in more detail further on in this article.

We also stock other voltages.

You need to make sure that the power output of the LED driver is high enough to cope with the power that the LEDs will draw. We recommend that you leave yourself a headroom of somewhere around 20% to avoid accidental overloading.

Therefore, if you find you need a 24V 120-Watt LED driver, you may be better off going for a 24V 150-Watt model. This means there is additional capacity to deal with any unexpected spikes.

If you want to dim your LEDs, then you will need to select a LED driver that is dimmable.

To do this you need to know the type of dimmer or controller that you intend to use. There are several different types available:

Be mindful that some manufactures of centralised lighting control systems, or home automation systems may offer more than one type of dimming control option under the same brand name.

Trailing edge and leading edge dimmers are installed across the AC input wiring to the LED driver. These are the most common types of dimmers you will find in most Australian homes.  You need a LED driver with Phase Cut Dimming in order for it to work with these types of dimmers. 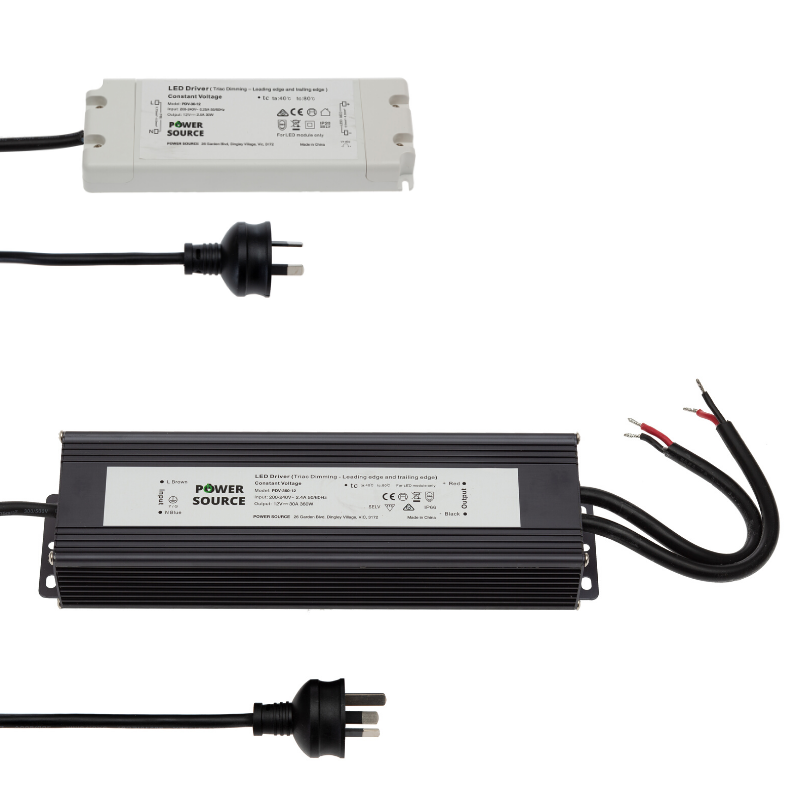 As this is a very common type of dimmable LED driver, we have listed them all together under one category on this website. You can navigate to the correct page by clicking on the link below:

For all the other types of dimmers, you will find that the LED driver will have dedicated dimming terminals or wires that the dimmer must be connected to. You cannot dim these LED drivers by placing a dimmer across the AC input wiring, and the dimmer would be damaged if you did so.

Just a word of caution about the term PWM dimmers.

At the moment we are talking about types of dimmers. Some home automation and lighting control systems give out a low voltage control signal that has a Pulse Width Modulation (PWM) duty cycle. This control signal is fed to the dedicated dimming wires or terminals on the LED driver. As the duty cycle increases or decreases the light level changes.

There is another term you will come across when talking about dimmable LED drivers and that is “LED drivers with a PWM output”. This is something completely different. It has nothing to do with the type of dimmer you are using.

LED drivers with a PWM output are constant voltage LED drivers, which have a PWM duty cycle built into the output.

Many dimmable LED drivers effect the dimming by varying the amplitude of the output current. On constant voltage LED drivers this can cause a phenomenon known as dead travel.  If you only place a 50% load on this type of LED driver, nothing will happen until you had turned the dimmer down past the 50% mark, after which point the light output would immediately drop to minimum.

To overcome dead travel, you must ensure the loading on the LED driver is no lower than 90% of its maximum output rating.

LED drivers with a PWM output are not affected by dead travel. The duty cycle of the PWM output overcomes this problem.

As we have already mentioned, you need to know where the LED driver is going to be used before you make your final selection.

If the LED driver is going to be used outdoors, then it needs to be weatherproof. By weatherproof we mean it must have an IP (ingress protection) rating that indicates it can withstand penetration caused by rain. We recommend you use a LED driver with an IP65, IP66, or IP67 rating for outdoor use.

Do not mount an LED driver in direct sunlight, even if it is weatherproof. This will cause the temperature inside the LED driver to rise above its maximum working temperature range, which has the potential to cause a failure. Such failures are not covered by the manufacturer's warranty.

Heat is still a consideration, even if you are using the LED driver indoors.

In this example you can see that at temperatures higher than 50°C you cannot place the maximum rated load on the LED driver. At 60°C the load should be no more than 60% of the LED driver’s maximum rating.

Therefore, you need to be aware of how hot it is going to get in the area in which the LED will be mounted.

Some locations can be very dusty, especially in industrial applications. LED drivers with an IP rating of IP65, IP66, or IP67 are also resistant to dust ingress. Do not use a LED driver that does not have one of these ratings in a dusty environment.

Assistance in Selecting a LED Driver

We have covered quite a bit of ground in this article. If it is a bit too much to digest all at once don’t worry. Our expert team are on hand to answer any questions that you may have and will gladly make suggestions as to which of our LED drivers you should consider for your application.

You may call us on 1800 632 693, or if you prefer you can send an email to technical@power-supplies-australia.com.au.