When charging caravan batteries, they are generally under load.

It is recommended that you use a caravan battery charger that has been specifically designed for charging batteries under load.

It is not uncommon for batteries in caravans, or boats to be under load when being charged. This is because equipment, such as refrigerators are left running when the batteries are being re-charged.

It is important to choose a battery charger that has been designed specifically for charging batteries that are under load.

This battery charger has been designed in cooperation with PSA and is exclusively stocked by PSA.

The key feature of the PB-360-12CDM over the standard PB-360 models is its ability to be able to safely charge lead acid batteries (flooded, Gel and AGM) that are under load, prolonging their life span.

This makes the PB-360-12CDM the best battery charger for use in caravans, motor homes, and any other application where you may want to charge a battery that is under load.

It is suitable for charging lead acid battereis (flooded, AGM, and Gel type).

If you intend to charge Lithium batteries, we suggest you read our blog post: CHARGING LITHIUM-ION BATTERIES WITH MEAN WELL BATTERY CHARGERS

The PB-360P-12CDM has been tested and certified to the strictest Australian Safety Standard for Household Charging Applications (AS/NZS 60335.2.29). This includes clause 12.102 (IEC 60068-2-6), which stipulates the vibration testing required specifically for caravans.

It also features an IEC AC input connector for simple and safe connection to the AC mains power supply.

To ensure reliable operation of the battery charger the following protections have been incorporated into its design:

The MEAN WELL PB-360-12CDM is available ex-stock and is backed by a 3-year warranty.

For further information on charging caravan batteries, please do not hesitate to contact Power Supplies Australia. 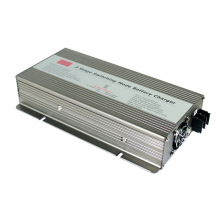