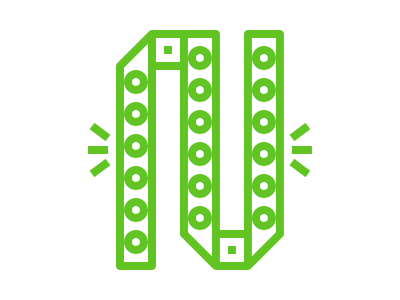 When selecting a dimmable LED driver for use with LED strip, it is recommended that you select a LED driver with a PWM output.

Some LED drivers dim your LED strip by varying the amplitude of the output current.

To acheive a satisfactory dimming result, LED drivers that do not have a PWM output need to be loaded up to their maximum capacity (PSA recommends 90~95%).

If the load is lower than 90% you most likely will find the dimming performance to be unsatisfactory.

For example if you place a 120 Watt load on a 240 Watt LED driver, nothing will happen until you turn the dimmer switch down to about the half way mark.

If you then turn the dimmer past the half way mark you will find the light suddenly drops down to very low, making it impossible to adjust the light to the required light level.

LED drivers with a PWM output dim the lights by varying the duty cycle of the output.

In layman's terms these LED drivers are cycling the output on and off at a very fast rate, this can be typically anything from 300 ~ 1.4Khz.

To dim the light the LED driver extends the momentary period the output is 'off' and reduces the 'on' time. The above diagram shows the output duty cycle of a LED driver with the ON period being about 50% of one cycle. This means the LEDs would be at about 50% brightness in this instance.

The key advantage LED drivers with a PWM output have, is that they will dim evenly regardless of the load placed on the LED driver.

If you do not use a LED driver with a PWM output, you have to work out exactly what length of strip you can use with your LED driver, to ensure that it is loaded to its maximum rating to achieve even dimming.

This task is harder if you are controlling multiple LED drivers from one controller. Each of the LED drivers will need to be loaded to exactly the same capacity, so that they dim synchronously.

The actual load values shown above are equal to 95% of the maximum capacity of the LED driver.

Typically the LED strip is cut to length on site, during installation. Sometimes it is necessary to cut the strip a bit longer, or shorter than originally anticipated. This means the load on the LED driver has been changed and the dimming performance could be affected.

If your LED driver has a PWM output you can relax.

Under normal circumstances Power Supplies Australia recommends that you only load up a LED driver to 80% of it maximum rating. This is to allow headroom for spikes in the AC supply.

LED drivers with a PWM output allow you to continue to follow this rule.

During installation if the length of the LED strip does end up being different to that origianlly calculated the dimming performance of the LED driver will not be affected.

Power Supplies Australia stocks two different series of LED drivers, with a PWM output. The main difference between the two is the dimming technologies used.

Most dimmer switches found in Australian homes will be either a leading edge, or trailing edge type dimmer. These work by chopping the AC input to the LED driver.

The PDV series LED drivers are available in two variants:

All models are available with either a 12V, or 24V output.

It should be noted that any LED driver installed outdoors should not be mounted in direct sunlight. This could cause the temperature inside the LED driver to soar above its maximum operating temperature. This could potentially lead to a failure, which would not be covered by the warranty.

Do not submerge LED drivers that are labelled as 'water proof' or 'weather proof'.

Other Types of Dimmable LED Driver

Power Supplies Australia also stocks the MEAN WELL PWM series LED drivers. As the series name suggests, these too have a PWM output.

The PWM series LED drivers have a plastic body and are IP67 rated, so they offer good protection against water and dust ingress.

It should be noted that the plastic enclosure is not UV stabilised, so could go brittle if installed outdoors.

As we have already mentioned above, any LED driver installed outdoors should not be mounted in direct sunlight. This could cause the temperature inside the LED driver to soar above its maximum oeprating temperature. This could potentially lead to a failure, which would not be covered by the warranty.

Do not submerge LED drivers that are labelled as 'water proof' or 'weather proof'.

Power Supplies Austraia carries the 12V and 24V models in stock. Other output options are available as special order items.

For non-standard voltages that we need to order in there is a minimum order quantity requirement of 200+ pieces and the lead time is typically 12 weeks. This is because a special version of the PWM series is required with Australian approvals and it is manufactured to order. You may see stock of other voltages offered for sale by international online sellers. Be careful, these are unlikely to have the required Australian electrical safety approvals.

All of the MEAN WELL PWM series LED drivers are available with MEAN WELL's 3-in-1 dimming.

This means the LED driver is compatible with the following type of dimmer switches and controllers:

If you have any questions about selecting the right LED driver for your application please do not hesitate to contact Power Supplies Australia.