The MEAN WELL IDLV LED drivers are perfect for when you need a low cost dimmable LED driver for indoor use with PWM output. The 45 Watt and 65 Watt models in both 12V and 24V options are now in stock and ready to order online. Other voltage options available within the range will be added in the near future and a 25 Watt model is anticipated to be released later in 2018.

They are compatible with 0-10V based dimming controllers and PWM type dimmers.

You can also use the SDF-30 1-10V dimmer switch to control these LED drivers, although this will only allow you to dim the light output to 10%.

The MEAN WELL IDLV LED drivers also have a PWM type constant voltage output. This means that they will dim evenly, regardless of the load on the LED driver.

Up until now only the MEAN WELL PWM series LED drivers gave you this functionality.

MEAN WELL constant voltage dimmable LED drivers, which don’t have a PWM type output vary the amplitude of the output current to affect the dimming of the LEDs. This method can suffer from a phenomenon known as ‘dead travel’.

This is where a dimmable LED driver is not being used to its maximum capacity, resulting in an unsatisfactory dimming performance.

For example, if you load a LED driver up to only 50% of its load, nothing happens until the dimmer control has been turned down past 50%, and then the light output suddenly drops. 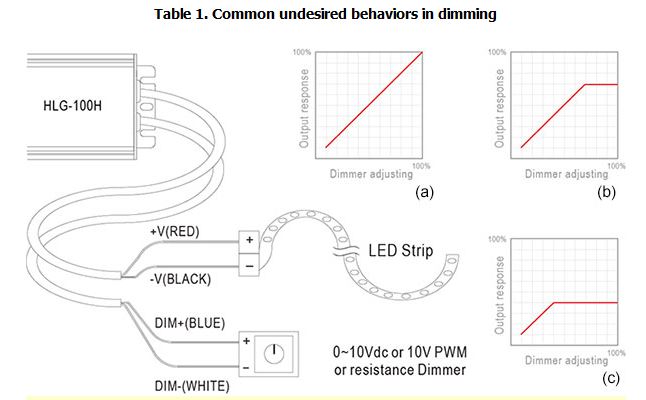 The PWM output overcomes this problem and eliminates the need to match the actual load as close as possible (90~95%) to the maximum capacity of the LED driver.

This is especially useful when installing LED strips, as they are often cut to length on site. If the actual length of LED strip cut differs from that in the original plan, it can change the loading on the LED driver, which could reduce the effectiveness of the dimming.  This is not the case with the new MEAN WELL IDLV series LED drivers.

Unlike other constant voltage MEAN WELL LED drivers stocked by Power Supplies Australia, the IDLV series doesn’t have a 1.8M flex and plug. Instead the AC, DC and dimming connections are all made via the screw terminals under the removable blue panel.

If you have any questions about the MEAN WELL IDLV series LED drivers please do not hesitate to contact Power Supplies Australia on 1800 632 693. A member of our expert team will gladly answer any questions that you may have.