There are basically two types of DC to AC inverter on the market; Modified Sine Wave and True Sine Wave.

In this article we take a look at how modified sine wave inverters work and what sort of applications they are best suited to.

All inverters take direct current (DC) from a battery, solar panel or other generating source and convert it into the 240V alternating current (AC) that is available at the power points in your home.

It is at the AC output stage where the types of inverter differ.

First of all let’s take a look at Alternating Current (AC).

With alternating current, the current is alternating its direction of travel repeatedly at a very fast rate. This rate is measured in frequency (Hz). In Australia the 240VAC power supply is delivered at 50Hz (50 cycles per second).

The AC mains power delivered to your home or business alternates smoothly with a sinusoidal curve that has a rounded peak and a clean ‘zero cross’ to a rounded valley. This is what we know as a true sine wave, the below diagram shows how the true sine wave looks. 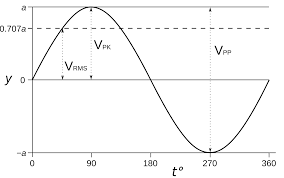 So, what are the benefits of a modified sine wave inverter and where can they be used?

They are best suited to powering electrical equipment that does not have any sensitive electronic circuitry. For example; a simple induction load like a motor, or a resistive load like a heating element.

Modified sine wave inverters don’t work to well with sensitive or advanced electronics. This is because some digital clocks use the incoming AC current to calculate time.

Because modified sine waveforms ‘rest’ on zero for a few milliseconds. The microprocessor could read this ‘rest’ as multiple zero crosses resulting in the time being calculated incorrectly. Many electronic devices have built in clocks as part of their functionality.

So if you want to run appliance such as fans, toasters, vacuum cleaners, etc. a modified sine wave inverter is a great low cost solution. It will give you reliable service and you won’t have spent a fortune buying it.

You can buy Modified Sine Wave Inverters on line by clicking on the following link:

Models range from 150 Watts right through to 2500 Watts, so there is bound to be a model that is suitable for your application. If you can’t find what you are looking for on this website don’t worry. Simply give us a call and we will gladly discuss which inverter is best suited to your particular application.